Kevin Sinfield is wary of unknown quantity Greece after England were drawn with the debutants for the 2021 Rugby League World Cup.

The Greeks booked their place in next year’s tournament despite a dispute which meant they were unable to play qualifiers at home due to rugby league being something of an outlaw sport there.

Samoa and old rivals France, who England have faced in the past two World Cups, completed the line-up for Pool A, but RFL rugby director Sinfield is taking nothing for granted against the newcomers.

“I think they’ll be something that is unknown and a potential banana skin for everybody, but I think they’ll be competitive and I think it’s remarkable what they’ve been able to achieve so far,” Sinfield, who played in three World Cups for England, said of Greece.

“As we saw with Italy two World Cups ago when we played them in a friendly, we nearly came unstuck and we need to be really careful.

“I think all of the teams in our group are tough. The French have caused us some problems in the past.

“We’ve played them in past two World Cups and got through unscathed, but they can cause an upset and Greece are a bit unknown at this moment in time, but I’m sure they’ll be in the mix as well.” 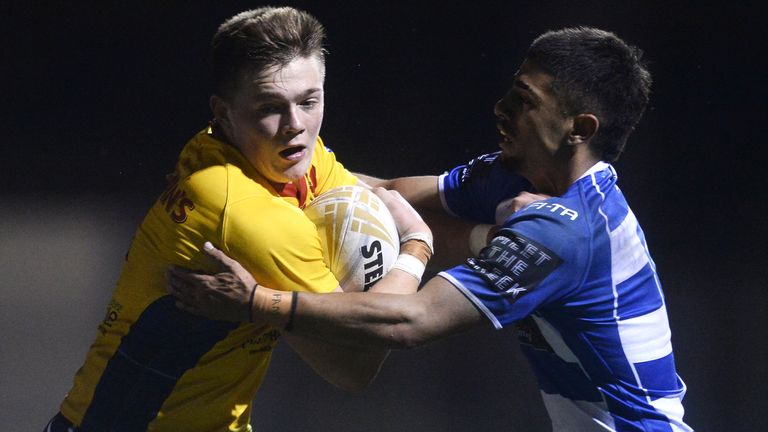 Greece, pictured in qualifier action against Scotland, are playing in their first Rugby League World Cup

Host nation England kick off the tournament against Samoa at Newcastle’s St James’ Park on October 23 next year, with the full pool stage fixtures for the World Cup to be confirmed.

Of the other Home Nations, Scotland were drawn in Pool B along with reigning champions Australia, semi-finals at the last two tournaments Fiji and Italy.

Wales are in Pool D with growing world power Tonga and their Pacific Island rivals Papua New Guinea and the Cook Islands, while Ireland will face 2008 World Cup winners New Zealand, Lebanon and the other debutant Jamaica in Pool C.

The women’s World Cup will run concurrently with the men’s tournament, with eight teams taking part and England in Pool A along with Papua New Guinea, Canada and emerging nation Brazil, who they kick off their tournament against at Headingley on October 26.

Australia, New Zealand, France and the Cook Islands make up Pool B, and England and St Helens star Emily Rudge is excited to be taking on one of the sport’s newcomers in the opening game.

“Obviously Brazil are a little bit unknown and one of the new teams who have been brought into the competition, so that will be really exciting first game,” Rudge said.

“We’re a little bit unsure of what to expect from them, but I’m sure we’ll see more of them over the next year or so, so that’s something to really look forward to.

“It’s really exciting times for the women, the game is growing massively and the tour to Papua New Guinea was proof of that. “We’re really building to the 2021 World Cup…and everybody is looking forward to putting the shirt on for that competition.”

Also taking place alongside the men’s and women’s events is the Wheelchair Rugby League World Cup, and all three tournaments will have equal prize money.

The wheelchair tournament, which is mixed-sex, sees England and Australia face off first up in Pool A, followed by them taking on Spain and Norway. Scotland and Wales are in Pool B with seeds France and the USA.