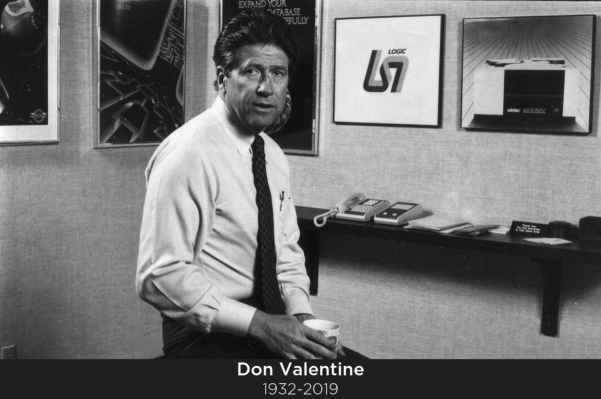 Sequoia posted a tribute to Valentine shortly afterward, calling him “one of a generation of leaders who forged Silicon Valley.”

A native of New York, Valentine majored in chemistry at Fordham University before joining Raytheon in South California, then moving north to the Bay Area to work at Fairchild Semiconductor, where over the years, Valentine began investing his own small checks into technology companies that he was meeting. According to Sequoia Capital, he soon attracted the attention of an early mutual fund group, Capital Group, which staked Valentine, allowing him to form a $3 million venture fund in 1974. Among his first bets from that pool of capital: Atari and Apple. He later led the firm into numerous other high-flyers, including Cisco Systems.

Valentine continue to lead Sequoia until handing over the reins well before retirement age to Doug Leone and Michael Moritz, though he continued attending partner meetings for another 10 years. The partners have said they were happy for his continued advice and guidance — not that they always agreed with him.

In 2017, in keeping with the firm’s focus on succession and ensuring smooth transitions, partners Roelof Botha and Alfred Lin were made U.S. co-heads of the firm working under Leone, who oversees the firm’s global operations with Neil Shen, the founder and managing partner of Sequoia Capital China. (Moritz stepped away for health reasons in 2012, though he has continued to remain actively involved in the firm.)

Leone issued a statement this afternoon about Valentine’s passing, writing: “We are deeply saddened to share that Don Valentine passed away on October 25, 2019. Don’s life is woven into the fabric of Silicon Valley. He shaped Sequoia and left his imprint not just on those of us who had the privilege to work with him or the many philanthropic institutions that invested with Sequoia, but also on the founders and leaders of some of the most significant technology companies of the later part of the twentieth century. Our thoughts are with Don’s wife, Rachel, with his family, and with all those inspired by his pioneering vision and indelible impact.”

Valentine chose the name Sequoia because it “conveyed the longevity and strength of the tallest of redwoods,” according to the firm’s tribute today to Valentine. They note, too, the “humility of someone who refrained from putting his own name on our business.”

Valentine is survived by his wife; three children; and seven grandchildren, according to Sequoia.

Valentine joined TechCrunch at a Disrupt event back in 2013. He appeared along with another pioneer of the venture industry, Kleiner Perkins Caufield & Byers cofounder Tom Perkins. Perkins passed away in June 2016 at age 84.