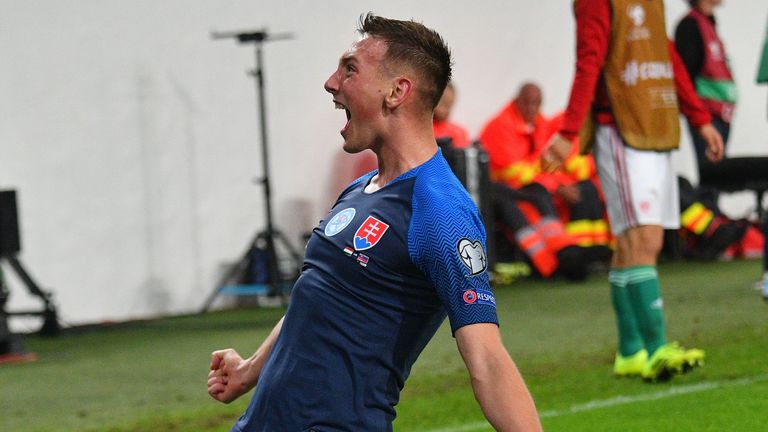 The 20-year-old MSK Zilina player has become their top centre-forward target in this window.

He has scored three goals and made four assists in 16 Slovakian top-flight appearances this season and has four goals in eight caps for his country.

While the Bees are currently pursuing a deal for Brozenik, they are also interested in Peterborough hotshot Ivan Toney and Switzerland international Cedric Itten at St Gallen.

Charlton striker Lyle Taylor – out of contract in the summer – is also a name on their list but he is older than their usual targets and recently picked up an injury.

Brentford have already signed Halil Dervisoglu from Sparta Rotterdam, but they still hope to land another centre forward before the deadline.

This is despite B-team prospect Marcus Forss also returning from a loan at AFC Wimbledon because of a hamstring injury, and the potential for him to force his way into contention after recovering.

Meanwhile, Brentford have opted not to pursue a move for Emre Mor after some initial interest in the Celta Vigo winger, who is currently on loan at Galatasaray.

Sky Sports will bring you the very latest news from the January transfer market with the return of three shows.

Start your day with Good Morning Transfers at 9am as our team of reporters bring you the latest news and insight. Transfer Talk then follows at midday delivering analysis of the biggest stories. Then join us at 7pm for the definitive round-up of the day’s news with The Transfer Show.

Meanwhile, the Transfer Talk podcast will also be back at the turn of the year with more expert analysis from here and across the continent.

And as well as tuning into Sky Sports News, don’t miss a thing with our dedicated Transfer Centre blog.